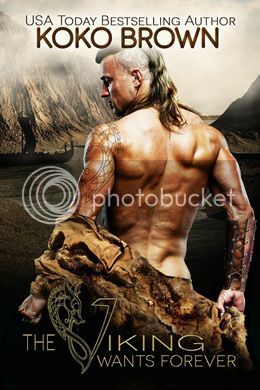 A Love Frozen In Time…


Reese Johnson yearns for a life other than the world of drudgery she’s settled for as the manager of Gotham City Comics. What’s that they say? Be careful what you wish for? Well that’s a motto Reese should have tattooed across her forehead. Because Loki, the Norse god of mischief, has just the remedy for the boring life of this woman who denounces his existence.


His recipe for disaster?


Take a 30 year-old woman and send her back in time as a pawn for revenge. Couple her with Eirik Sigurdsson, a Viking Warlord, too arrogant and baggage-laden to be of any use for anything, but battle and bed. Mix thoroughly, folding in a heavy dose of pride, a tyrannical king, and a sympathetic goddess. Bake at high until a white-hot love is unleashed and then forever frozen in time.

Excerpt
Reese paced back and forth in front of the fireplace in mounting anxiety. She’d been holed up in Eirik’s private bedchambers long enough. Long enough to rifle through his things in search of the black tourmaline and even to grow concerned for Eirik’s safety.


Flinging herself down on the bear rug in front of the fireplace, she tore at her cornrows in anger. Once she set her hair free, she then tackled the tightly wound curls with a whalebone comb, until her hair floated around her shoulders like a soft cloud.


Reese couldn’t help the smile that came to her lips. Despite the less than stellar circumstances in which she had been dumped, she was secretly delighted he’d fought to keep her. Therefore, with each step that brought him closer, her heart rose another inch, threatening to cut off her breathing with its wild palpitations. She gasped when he reached down and pulled her up against him.


“I-I thought you weren’t coming back. I was going crazy with worry. What took you so long? You aren’t hurt are you?”


“I needed to cool off before I came back to you.” He paused to lean forward and nip at her bottom lip. “If I had not, I would have come back here and rutted in you like a wild animal. Would you have liked that?” he asked, spanking her backside.


Reese bit her lip. The idea of him doing just that excited her. Reaching up, she grabbed both of the white-blond braids hanging on either side of his face and wound them around her fingers. With a gentle tug, she pulled his head down until their lips were level. She stuck out her tongue and traced his bottom lip. When he groaned in pleasure, she pulled back to look at him.


“Does that answer your question?” she purred.

Koko Brown is an USA TODAY Bestselling author and romance junkie who once read over 200 Zebra romance Club novels the summer before her senior year in high school.


Her writing career began at the tender age of nine when she self-published and distributed a newspaper for her fellow classmates. Unfortunately, her grade-school principal Mr. Clark didn't appreciate the competition and put her out of business after one best-selling issue.


Undaunted, Koko continued to write and read everything she could get her hands on. She honed her writing skills as a staff writer on her college's newspaper, writing obituaries for the local newspaper, and even teaching American Literature.