Clearing the Air About Sam Taylor Mullins and Crew

On June 14, 2014 I received an email from a Sam Taylor Mullens asking if I would review her upcoming book, Auction Deal. I read the synopsis she provided and thought it sounded like it would be a good read. I responded that I would be happy to. She sent the file for the book which I forwarded to my Kindle and deleted the ARC email. Due to this being a read/review on my own time and not as part of a tour, I put the ARC to the bottom of my list.

On July 23, 2014 I took a hiatus from the book blog due to personal issues (still on hiatus). During this time, I only checked my email a couple times a week. On August 4, 2014 I received another email from Sam Taylor Mullens stating that it had been brought to her attention that her novel resembled another novel written years ago. She stated that she would not be releasing it and that it should be deleted promptly. I took the book off my TBR list of ARCs and made a note to delete it from my Kindle account the next time I logged in. I went on about my business.

This morning, I logged into my personal facebook and saw a post about an author taking a stand against plagiarism. I clicked the link to read the blog post. Imagine my surprise when I saw that the author was claiming that Sam Taylor Mullens had plagiarized her novel from 1996 (written)/1998 (published). I read the entire post. I saw the similarities. I read the comments. I saw how vicious this Mullens and her cronies were. I then made the mistake of commenting that I had not yet deleted the ARC and still had the pdf file (via my sent folder). Ms. Nunes (the author of the original book) stated that they needed an ARC for the lawyer and of course, Ms. Mullens was unwilling to allow her a copy. I was willing to give my copy to the lawyer. Ms. Nunes emailed me to tell me that another reviewer had sent her a copy but wanted to thank me for the well wishes for what appears to be a long journey. I told her that I wish her good luck in finding the real name of Ms. Mullens and bringing her to justice (copyright law, people. I studied it). I then went on about my real life.

I returned home from taking care of REAL LIFE and was prepared to sit down, write for my personal blog, and then work on my own novel. I still had my email browser open from earlier and glanced at it before closing it. I noticed I had a few more new emails so I read them. One was from a GIBSON
CAUGHLIN. I read it and it was a "PA to several indie authors" who had been told that I was sharing/selling ARCs. There was no mention of which authors she was PA for or what ARCs I allegedly had sold/shared. I almost responded but thought better of it. I decided to ignore this email. I had never heard of this person and I have corresponded with SEVERAL PA's.

I was sharing my anger of being accused of such a thing with another book blogger. She said that she had never heard of this PA either (and her blog is far bigger than this one). I received notification from another book blogger who told me that someone was making allegations against me on their page and even gave me the link. I went and read the comments and it became VERY clear who Gibson Caughlin was. These allegations were being made on a page belonging to BETHANY BOOKLOVER JOHNSON who said she tried to email me but had not received any response (I guess she doesn't have a life to tend to?). This is also the same person who messaged my page numerous times trying to get help for promoting Sam Taylor Mullens.

Here are the screen shots of her lovely facebook posts:

Now, ANYONE who knows me knows that, morally, I could never do such a thing. They also know that I will personally email any and every author I find whose work has been pirated to alert them to it. I am on street teams with several awesome authors who know that I protect their "baby" with my life.

People who know me also know that I am in the process of writing my own novel. I have 3 fears when it comes to publishing it.
Now, why on earth would I do something that I wouldn't want to happen to me?

Being bullied (yep, that's what you're doing. Also guilty of trying to tarnish the good name of someone) is no fun. It's apparent by the evidence that Ms. Nunes laid out that Ms. Mullens did indeed plagiarize her. There is no need to attack others because they want to see someone who BROKE THE LAW (copyright infringement) punished and is willing to help do it. All bloggers and authors need to stand together against piracy AND plagiarism. That's where I am. I am against both!

And, just for the record, if anyone has ever won a contest and the prize was an ebook from me (not an author or another blogger), it was gifted directly from Amazon.

Life had returned to normal. Sounds like the ending to a book, doesn't it? But, unfortunately, it's not. I made, yet another mistake, when I commented on a status on someone's page stating that I was leery of First Name "Booklover" Last Name facebook profiles. I mean, after all, it was one of those very profiles that tried to run a smear campaign against me. But, lo and behold I woke up to not one but two messages from Ms. Sam Taylor Mullens herself. Part of me said don't read them, the other part said to just read them and get it over with. So, I did. 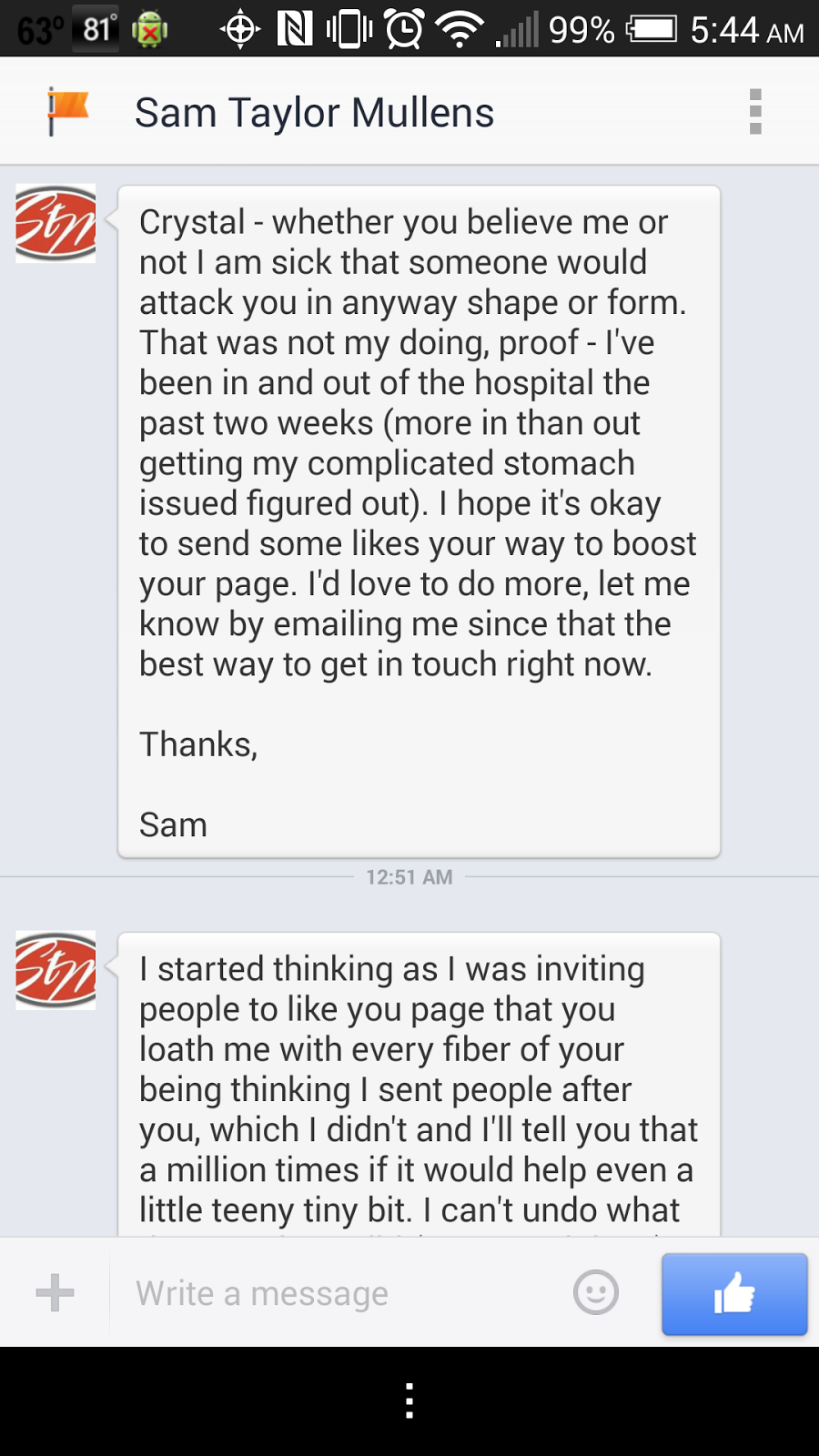 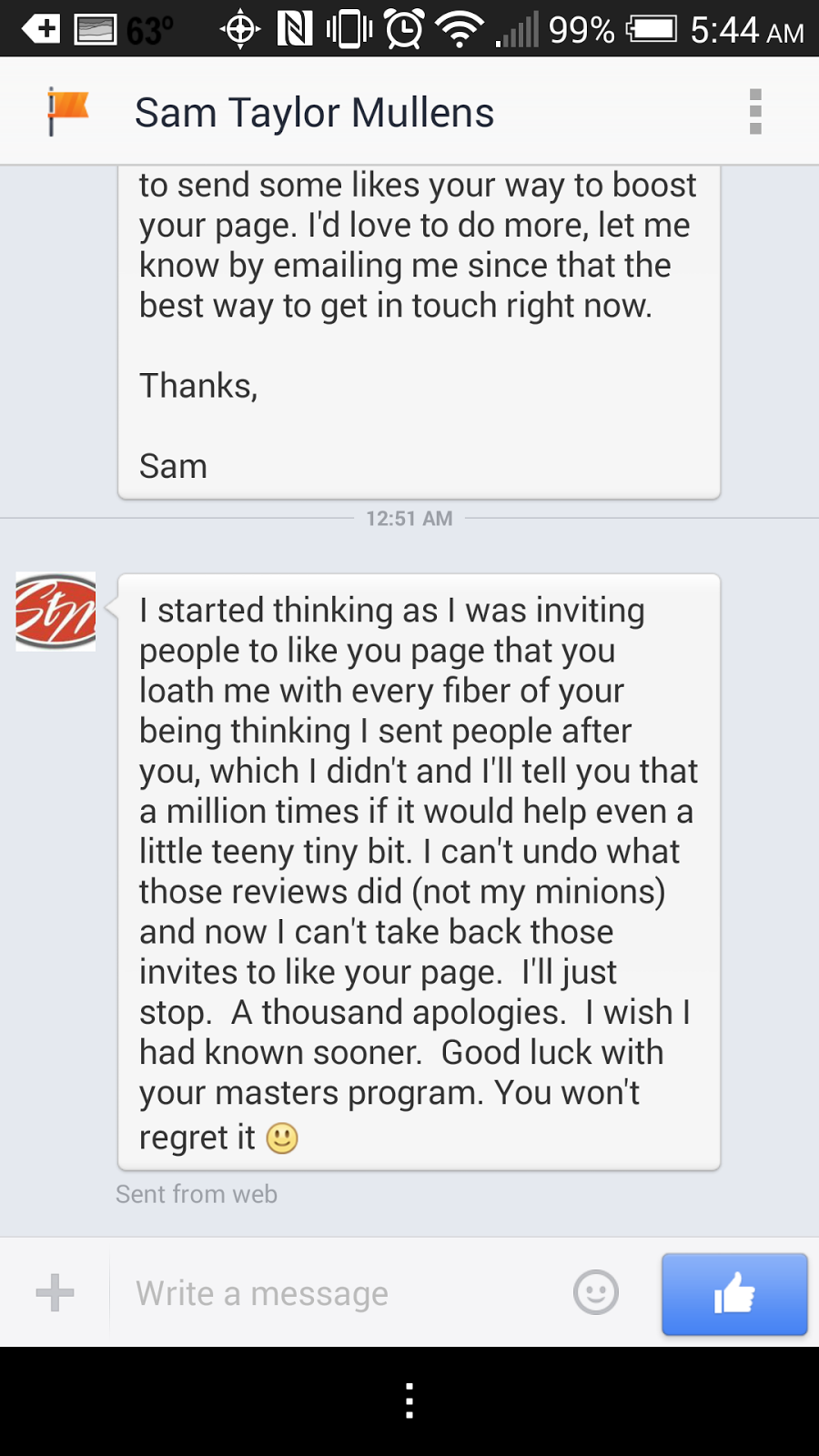 Now, I'm not sure what brought the first message on. Guilt? Innocence? Sympathy? I don't know. I just wish she had left it at that. But, then she had to say that I "loath" her. Farthest thing from the truth. I honestly feel sorry for her. I feel sorry that she feels like she has to do so much damage control when all she had to do was admit to an error in judgement to Ms. Nunes privately. None of this would be out in the open. I'm sure that this update will bring more drama to me. Sadly, I'm used to it. I'm use to the anticipation of wondering if I am getting another message or accusation every day.

For those that she invited to my page, feel free to stay, but please know that you don't have to. That decision is entirely up to you.

And a final note, that Masters degree that she is referencing (she read the page well because that post was buried under a lot of book promotion) is in Psychology. :-)

Email ThisBlogThis!Share to TwitterShare to FacebookShare to Pinterest
Labels: Announcement, Things That Need to be Said