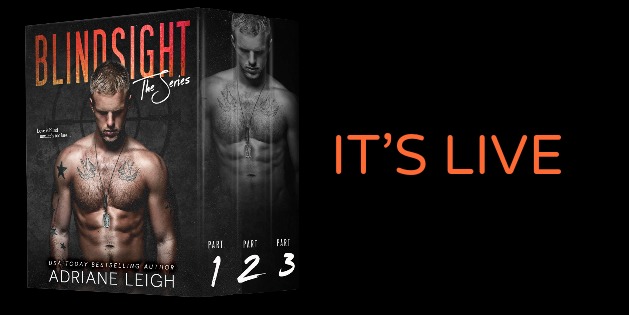 All three books are included in this edition.


BLINDSIGHT (Part One)
I want her.
She thinks I need her.
What she doesn't know is she needs me more.


I'm hiring her to protect her.
To save her life.
To make her beg.


Because her big brown eyes make my d-ck pound and the thought of leaving her to the wolves makes my heart bleed. But the past is colliding with an out of focus present that's on course to a fatal future. Unless I can beat fate at its own game.

BLINDSIGHT (Part Two)
She and I were far from chance.
Our first meeting orchestrated.
Our forever ill-fated.


Because I'm her enemy.
I'm her savior.
I'm her nightmare Romeo.


She'll thank me at the end of this, and if she doesn't, I'll force her to beg.

BLINDSIGHT (Part Three - only available in the complete bundled series )
The web of secrets surrounding Hunter and Erin begins to unravel in the gripping final installment of the Blindsight series...


I was hired to watch her, tasked myself with protecting her, and now I have to save her.
I tried to be her Romeo, but despite everything the past crashed into our lives like wild thunder.
She begged me to run, I begged her to stay, until a force greater than both of us took over.


Betrayal comes in threes, and the other shoe's about to drop.


*Blindsight is intended for a mature audience only due to graphic sex, violence, and language

``Ah, I see the little bird has awoken.'' A voice echoed and my eyes sliced around the room looking for the owner. A soft chuckle was the only response as my eyes, wide and watery, refused to focus. Shadowy fluorescent light bounced off every surface.
``Where am I?'' I choked, desperate for the answer while dreading hearing the voice again. My head felt heavy and confused, reminding me of the syringe they'd plunged into my arm when they'd taken me.
``Let's find out just what you know, shall we, Princess?'' The word turned my heart cold. Froze it to stone in two syllables. I didn't need to see the face in the door to know who it belonged to.
Him.
Bile rose in my throat as my eyes shuttered closed in my only mental defense. I was ready for a blow, a bat, maybe a crowbar. Guys like him liked to leave a calling card on your face. What happened in the following minutes would almost kill me. One fragile piece at a time.
``When did you call the Feds?'' John Ellis Walker, living embodiment of terror on the streets of Chicago, sneered at me with a crooked grin and chipped teeth.
``I didn't,'' I grit, my eyes remaining closed.
His hot breath washed across my face. ``Bullshit.'' He caught my elbow and tightened. Pain seared through my shoulder when he twisted my arm in warning.
``I didn't. It wasn't Hunter either,'' I defended lamely. This was not the plan. Think fast, Erin. Think survival. ``He didn't have anything to gain by doing that, and neither did I. I don't know anything.''
``You had everything to gain.'' The pad of his thumb touched my chin and worked my jaw to the side before swiping his thumb across his tongue and smearing saliva down my cheek. ``Wouldn't want you dirty for when Prince Charming gets here.'' He stalked back to the doorway.
My prince. Could Hunter really get here? Oh God, JW had taken me to get to Hunter. Of course that was the reason. A sob fell from my throat as I made a sad attempt at shuffling across the damp concrete on my knees.
``Why the hurry to leave, Princess? Fun's only begun.'' JW hauled me up by my shackled wrists and plopped me in a rusted metal chair, taking me by surprise and pressing a hunk of cold metal at my throat before I could blink. His rough hand slid through my snarled hair and gave a sharp tug. He stuck his nose against my ear and inhaled, the chilled metal still dancing across my skin as he took his fill of my scent. ``No wonder Clu's puttin' it to ya. He's got a thing for the sweet ones.'' He tapped the metal at my jugular before pulling away. ``Where the fuck did that snake you married put the money?'' JW asked again, then released me with an angry jerk, taking a step back and tapping the barrel of the gun under my chin to raise my eyes to his. They fluttered open, my confidence boosted with the realization that if JW thought I knew where the money was, he wouldn't kill me.
``I have some ideas,'' I answered, holding his golden, serpent-like gaze. JW kicked at the legs of my chair causing it to wobble and tip to the cold floor, leaving me even more banged and bruised.
``Cut the games. Just like your slut mother.'' JW kicked at the chair again. ``I hope you don't know where my money is, Princess, because if I find out you do, I'm pulling your pretty teeth out one by one.'' His dank breath filtered through my nostrils and curdled my stomach.
``He's here,'' the other man I'd met at the VIP lounge only weeks ago boomed. He must have recognized me. How could he not? But then again, I probably wouldn't recognize myself after lying on a grungy concrete floor, my body caked with grime and bruises.
``Perfect.'' JW stalked from the room, slamming the heavy door as he went. I heard the scrape of an industrial lock announcing my dim fate. I looked around the room, spotting a window filtering a minuscule amount of daylight in. But the walls were at least ten feet tall, no way could I reach. I swallowed the ache in my throat as my gaze cast around the room. Nothing. There was nothing. My stomach turned, and just as I thought they could have at least left me a waste basket to throw up in, a gunshot echoed through the long tunnel of the building.
``Oh God.'' No. No. No. My stomach dropped and I bolted to the steel door and pressing an ear to it. ``Hunter. Please. Not. Hunter.'' I sobbed and prayed in equal turn, waiting for anything to betray the truth of the situation.
Nothing. Cold, empty silence. My stomach burned and rolled before I slumped to the floor on my knees in reckless sobs.
Please, not Hunter. 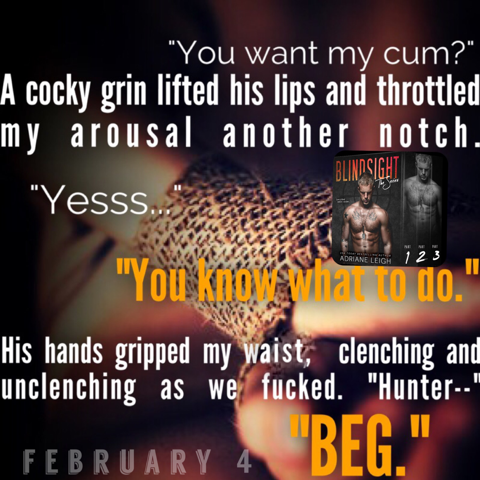 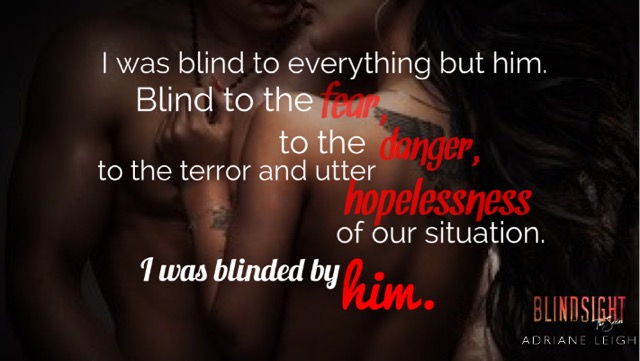 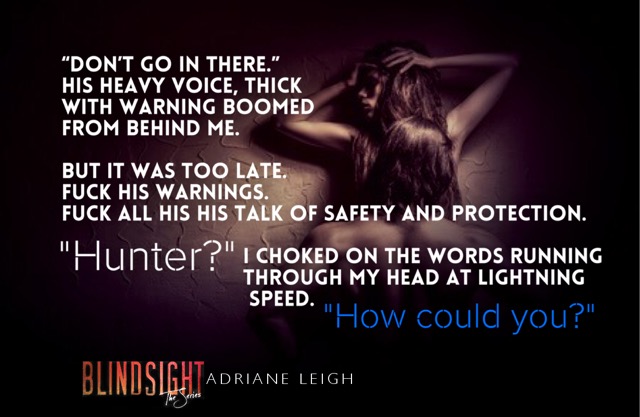 Adriane Leigh was born and raised in a snowbank in Michigan's Upper Peninsula and now lives among the sand dunes of the Lake Michigan lakeshore.
She graduated with a Literature degree but never particularly enjoyed reading Shakespeare or Chaucer.
She is married to a tall, dark, and handsome guy, and plays mama to two sweet baby girls. She is a voracious reader and wishes she had more time to knit scarves to keep her warm during the arctic Michigan winters.
Author Links
Twitter  Facebook  Web  Goodreads  Amazon author page Instagram