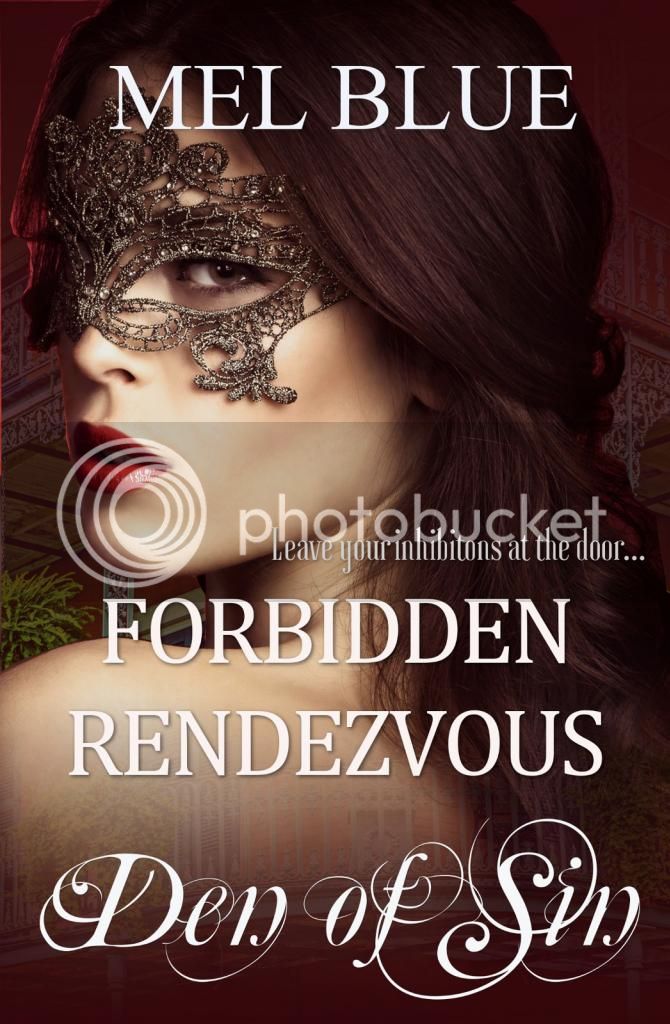 B&N: http://www.barnesandnoble.com/w/forbidden-rendezvous-mel-blue/1117562659?ean=2940149039654
EXCERPT:
Indecision played over her features until she straightened her shoulders. “I'll read the file.” She smiled, and a mischievous glint filled her eyes. “Where do you want me to start?”
Taken off guard, he stammered. Her smile widened, because she'd called his bluff and he'd flustered. Him. He could back down, but the next time they did this she'd know just how far he'd go to get a rise out of her.
He couldn't waver, otherwise their time together would lose the frisson it usually had. So, Luke cleared his throat and waved her back to the table. Who would have thought she'd rather continue to call him by his last name than to read something explicit out loud?
Heat flushed his face and he wanted to open the balcony doors again, but if she wouldn't say his name, she sure as hell wouldn't take his jacket. He'd noted her nipples pressed hard against her white shirt, but she hadn't complained about the cold.
When she settled into the chair across from him, he took in the tremble in her fingers as she opened the folder. Fuck. He tended to be a jackass from time to time, but this might be too much.
“Seraphina, you don't—”
“I'll start with my hand.” She ran her fingertips over the papers. “I know there are toys I can choose from, but the most intimate way you can get to know me is with my hand. I love to feel the way my clit swells the more turned on I get.” She glared up at him. “Do you want me to stop?”
He could barely move, much less speak. Her voice felt like silk running across the head of his cock. “You can stop if this makes you uncomfortable.”
She licked her lips, breaking the eye contact. “The more turned on I get, the wetter I am. I'll run my middle finger over my pussy to spread the slick warmth of my arousal. You'll lick your lips and your blue eyes will narrow. My nipples will tighten. They'll blush dark pink and I'll have to play with them to ease the ache.”
His mouth went dry. “Sera—”
She swallowed, her cheeks flushed. “Will you touch yourself too? Or would you want me to take your cock into my mouth? The taste of your pre-come will make me moan, make me wetter, and I'll come for you and let you watch.”
He slammed his hand down on the table. “That's fucking enough.”
She closed the file, her hands steady now. “Are you sure that's enough, Mr. Moreland?” She sounded...aroused.
The doors were closed and the hotel suite was warm now, but her nipples pressed against her white blouse. He pushed air out. “Unless there's something you want to add.”
“If you can't handle this...” She waved her hand over the folder.
He narrowed his eyes. “Try me.”
Their gazes held for another moment. “Uh-I-I think you've made your final decision. I need to let Mr. Beaudelaire know and to contact Joss with the details.”
His muscles strained to reach across the table, drag her to his mouth, and then have her beneath him. He'd have her in every way his imagination could offer up. “I'll take Joss, but make no mistake, I'd rather have you, Ms. Gibson.”
She licked her lips again, her face flushed and gaze filled with a desire he could damn near feel brush against his skin. His jaw clenched.
“Good night, Mr. Moreland.” She picked up the files and he let her walk out.
Without trying to, she'd stripped him of his belief that he'd never want a woman who hid herself, a belief he held close. And she'd brought him to that edge, not with her own words, but with someone else's. Maybe it was best she’d told him no. He apparently needed her to. He damned her for it anyway.
MY REVIEW:


** I received an ARC in exchange for an honest review. **

First off, this book is set in New Orleans which is like my most favorite place in the world {not to mention home}. Therefore, I was automatically going to favor it. This is a nice little short story; it took me hardly any time at all to read it (although I am a fast reader).

Seraphina's job is to find a suitable woman to fulfill Luke's kink fantasies. She manages to get him to agree to the one she has chosen for him. However, the woman falls ill leaving Seraphina in a bind. She has to find him a suitable replacement in a hurry. Instead, she breaks the rules and disguises herself in order to fulfill her own fantasy. What happens when Luke realizes who she really is? What happens when her boss finds out that she broke the rules?

There is a smaller story behind the sex storyline. We learn that both Seraphina and Luke have issues in their past which make them shut off to relationships. Can they overcome their pasts and move on whether together or apart.

I loved this story. While the story is resolved at the end, I actually want a continuation of it.